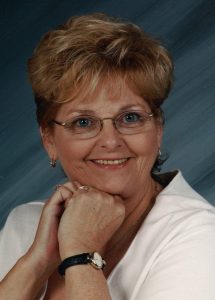 She was born in Detroit, MI, and lived in McIntosh County most of her life.  She was a former paraprofessional with McIntosh County Schools for many years, a Red Cross volunteer, a firefighter for twenty-five years, a volunteer with American Legion Post 9 Auxiliary in Brunswick, where she was elected secretary, and was a homemaker.  She was a member of Eulonia Church of God of Prophecy and had been church pianist at Morgan’s Chapel United Methodist Church while a member there for many years.

She was preceded in death by her husband, Frank Wallace and parents, Harold and Ada Jesweak.

Survivors are her daughters and sons-in-law, Kimberly Wallace and Raymond Soto, Michelle and Terry Draffin, all of Townsend; son and daughter-in-law, Frankie and Linda Wallace of Townsend; brother and sister-in-law, Donald and Dani Jesweak of Bogart; six grandchildren, six great-grandchildren and several nieces and nephews.

Visitation will be one hour prior to services at the church.

Honorary pallbearers will be Post 9 American Legion Auxiliary members and all public safety personnel in attendance.

Remembrances are suggested to charity of donor’s choice.