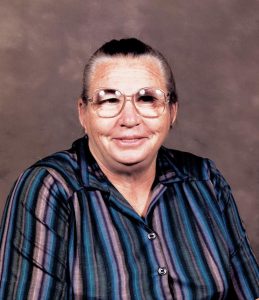 Jessie Howard Robson, 85, passed away on Tuesday, September 15, 2020  at GraceMore Nursing and Rehabilitation Center in Brunswick, under the care of Hospice of the Golden Isles after an extended illness.

A native and lifelong resident of McIntosh County, Jessie was born on July 14, 1935 to the late Elbert Jesse and Mary Victoria Rowe Howard.  She was a homemaker and a member of the Townsend Church of God for over seventy years.  Jessie devoted herself to her family and was always there to lend a helping hand to anyone in need, especially her husband.

Funeral services will be at 2:00 p.m. on Monday, September 21, 2020, at the Townsend Church of God, with Reverends Jamie Rivera and Adam Cothern officiating.  The family will receive friends one hour prior to the services at the church.

Pallbearers will be family and friends.