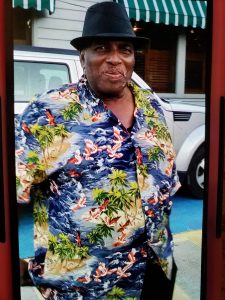 Joseph R. Sullivan, a native of McIntosh County, Georgia, was born October 19, 1935 to Lawrence and Maggie Lotson Sullivan. His parents, along with his wife, Fannie Sullivan, and three brothers, Leroy, Lawrence Jr., and Melvin, preceded him in death.

Joseph attended McIntosh County Schools, graduating from Todd-Grant High School. After graduating, he fulfilled his true passion as a commercial fisherman, working with his father, until his father’s untimely death. He then moved to Tampa, Florida, continuing his career as a commercial fisherman, with over 40 years of service. He journeyed near and far, spending many seasons all over. With everyone he met, he often reminisced with stories of his life as a fisherman.

He then moved back home to Georgia in the late 1980s, pursuing a career as a block/brick mason. He later married Ms. Clorinda Jackson of Crescent, GA. He then moved to Savannah, Georgia, to work and be near his brother, Lawrence Jr. After becoming ill in 2014, he moved to Brunswick, Ga., living in the Senior Care facility. He loved playing his Blues music in the facility, he said with a smile, to wake up everyone there.

He leaves to cherish his memories, two daughters, Patricia (Randolph) Wynn of Brunswick, Ga., and Doris Deas of Darien, Ga.; one son, Maurice (Hazel) Barton of Tampa, Fla.; six grandchildren; nine great-grandchildren; one sister, Shirley Everson of Meridian, Ga.; one brother, Eugene Sullivan of Tacoma, Wash., two sisters-in-law, Elizabeth Sullivan of Savannah, Ga., and Marie Sullivan of Crescent, Ga.; one uncle, Adolphus Lotson of New York; a host of special nieces, nephews and cousins who are dear to his heart; a special friend, Marth Blige of Savannah, Ga.; and other relatives and friends.

A walk-through viewing will be held from 2 to 5 p.m. on Tursday, Sept. 17, at Darien Funeral Home.

Graveside funeral services will be held at 11 a.m. on Friday, Sept. 18, at Hutcherson-Lotson Cemetery on Rossville Road.

Masks and social distancing are required.

Darien Funeral Home is in charge of arrangements.