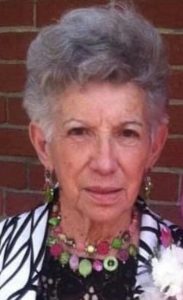 A lifelong resident of McIntosh County, Ina was born on February 16, 1934 to the late Eddie and Minnie Poppell of Ludowici, Ga.

She worked for thirty-seven years as a waitress with Western Sizzlin and Quincy franchise.  In her later years, she worked in housekeeping until she retired in 2015.  She loved gardening and working with her flowers. The love of her life was her grandchildren and great-grandchildren. She loved spending time and being with family.

She will be greatly missed by all who knew her, loved her and ever spent time with her.

Graveside services are being planned by the family for a date and time to be announced.

In lieu of flowers, memorials contributions can be made to the American Cancer Society https://www.cancer.org.

Family and Friends may sign the online register at www.howardfuneralga.com