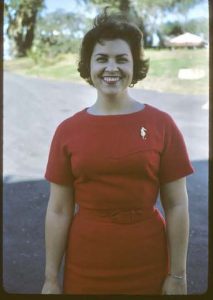 She is pre-deceased by her parents, Montee Christopher and Frances Lee (Padgett) (Craig) Middleton; brothers Charles Montee and Hendley Christopher Middleton; and half-sister Emily June (Craig) Chambers.  Maurine was born January 2, 1940, in Jesup, Georgia, and grew up in Townsend before moving to Darien as a teenager.  Educated in McIntosh County public schools, she graduated in 1957 from Darien High School where she was Valedictorian and earned the D.A.R. Best Citizen Award, the History Award, the Science Award and the Debate Award.  She was voted the “Freshest Freshman,” “Sauciest Sophomore,” “Jolliest Junior,” “Senior Most Likely to Succeed,” and also earned the title of “Best All Around Cheer Leader.”  She subsequently graduated from the Georgia State College for Women at Milledgeville with a Bachelor of Science in Business Administration in 1962.

After college, she worked at the Naval Air Station Glynco and later at the Bureau of Commercial Fisheries Laboratory in Brunswick, where she met her future husband, James Postles Thomas, a graduate student at the University of Georgia Marine Institute on Sapelo Island. They married at the Darien Methodist Church on August 21, 1965, before moving to Athens. There she worked as a credit manager for Central Soya Poultry Company, taught elementary school in Lexington for a year, and worked in the USDA Forestry Service Laboratory as a Technician.

Their son, James Postles, Jr. was born in Athens in 1968; followed by a daughter, Virginia Lee, born in Seattle, Washington in 1970; and a daughter, Nancy Kathleen, born in Long Branch, New Jersey in 1973. A mainstay in her children’s activities, Maurine served on the Parent Teacher Association; as a room parent; and as a Den Mother in Cub Scouts and Troop Leader in Girl Scouts. She was an active member of the United Methodist Church in Red Bank, New Jersey and the Vienna Presbyterian Church in Virginia, where she was a Deacon, Greeter, and leader of several small groups. As her children reached adulthood, she became a travel agent, enjoying trips all over the world with her husband and dear friends, travelling to all fifty United States and more than two dozen foreign countries spanning the Americas, Europe, Africa, and Asia. She was also an avid gardener and served as an officer in the Five Hills Garden Club.

Her greatest passion in the last quarter of her life was grandparenting. When each grandchild turned six, she took them on a great adventure to New York City by train. She organized annual family gatherings on St. Simons Island. And she loved spending time in the kitchen teaching the grandchildren how to make her famous sour cream chocolate cake or Brunswick Stew.

A memorial service will be held at Vienna Presbyterian Church, Vienna, Virginia after the ongoing pandemic has subsided.  She will be interred at Middleton Memorial Church cemetary in Long County.

Edo Miller Funeral Home is in charge of arrangements. In lieu of flowers, the family requests that memorial donations be made to a local food bank, or the Committee for Helping Others, P.O. Box 233, Vienna VA 22183.