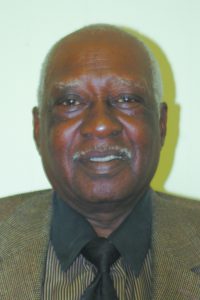 He was born on July 29, 1932 in Meridian to the late James Jordan Sr., and Ellen Edmond Jordan. He was the youngest of four children. His two brothers Harry Jordan and James Jordan Jr. and one sister, Ola Jordan, all preceded him in death.

He served as Deacon of Elm Grove Baptist Church for 20 years. He later became a member of Greater Works Than These Ministries.

Deacon Jordan was a man who put his family first. He was a devoted and loving father and husband, who led with strength. He instilled in his family the power of prayer and the importance of having a strong relationship with God. He married Gertrude Jordan in 1973 and together they raised six children, Dwight, Phyllis, Cheryl, Magdolan, Keith and Tykeisha. Phyllis preceded him in death in 1994.

He was a graduate of Todd-Grant High School in Darien in 1950. He attended Savannah State College. He left McIntosh County at an early age and settled in New York City, where he worked as an electrician in his early years. Later, he worked for the Metropolitan Transit Authority and retired in 1985, after working over 20 years. Upon retirement, he returned to McIntosh County and became heavily involved in his Gullah-Geechee heritage and community.

He devoted his life to serving others. He enlisted in the United States Army and served in the Korean War and later retired from the U.S. Army Reserve after 20 years.

He was an elected McIntosh County Commissioner for 28 years. He was active on the Board of Directors for Coastal Georgia Area Community Action Authority, Gateway Community Service Board and the Coastal Georgia Regional Development Commission. He held memberships in Free & Accepted Masonry Prince Hall, Rossville Lodge #346, Holy Royal Arch Masons, PHA Leroy Bolden Consistory No. 345 and Amman Temple No. 82.

Funeral services will be held at 11 a.m. on Saturday, Feb. 13, at the McIntosh County Middle School Gymnasium in Darien, with Pastor Mark Baker officiating.

Arrangements are under the direction of Darien Funeral Home.