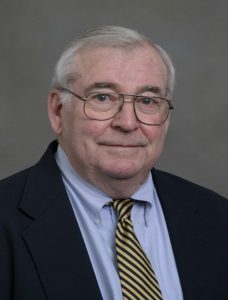 Bill graduated from Knoxville High School, Knoxville, TN, and the University of Tennessee, where he was a member of Sigma Alpha Epsilon fraternity. Upon graduation from UT, he joined the United States Army. Returning from the Army, Bill settled in the Golden Isles, where he met his wife of 58 years, Beth Newton of Millen, GA.

In 1966, Bill founded Golden Isles Realty Company located on St. Simons Island, which continues to operate with his two sons, Clarke and Al. Service to his community was an integral part of Bill’s character. He served as President of Golden Isles Board of Realtors, Chairman of St. Simons Island Chamber of Commerce, Chairman of the Airport Commission, Chairman of the Board of Frederica Academy, Board of Directors of SunTrust Bank, and Board of Directors of Southeastern Bank. He was a member of St. Andrew’s  Episcopal Church ,where he served as Senior Warden. In addition, he was a member of the Sea Island Club and Brunswick Country Club.

As an avid outdoorsman, he instilled in his children and grandchildren his love and respect for nature. He was a gentleman in every sense of the word, a great storyteller, and an advice giver whether solicited or not.

In addition to his wife, he is “DAD” to Clarke (Stephanie), Anna (Freddy Stroud), and Al (Anna) and “GRANDDADDY” to Frederick, Elliott, Bennett, Carson, West, Molly and Lucy. He is also survived by brother-in-law John Cleve Newton (Billie), and sister-in-law Sylvia Summers (Dr. Roland), as well as several nieces and nephews.

The family expresses their gratitude to Doctors Strickland, Chitty and Callender and the nursing staff, who provided special attention and support.

A graveside service is scheduled for Thursday, March 4, at 11 a.m. at St. Andrew’s Cemetery, Darien, GA. Masks and social distancing are requested.

Arrangements have been entrusted to Edo Miller and Sons Funeral Home in Brunswick, Georgia. www.edomillerandsons.com