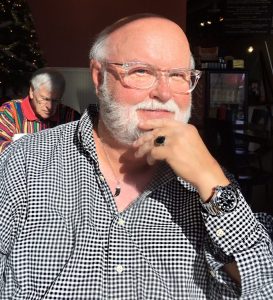 Stephen Herbert Sweat, 71, passed away Saturday, the 17th of April 2021 while resting in his home in White Oak, GA.

Steve Sweat was born the 12th of December 1949 in Waycross, Georgia, to the late Herbert Hoover Sweat and the late Frances Crews Tanner. Mr. Sweat graduated from Waycross High School in 1968 and went on to become a 1972 graduate of Georgia Southern University, where he earned a degree in fashion merchandising. While at Georgia Southern he was a charter member of Phi Delta Theta Fraternity. He spent his entire career in sales working in the apparel business for Wrangler, Manhattan, Oxford Industries, and SML. His work took him across the United States and ultimately the entire world. He and his beloved wife moved from the place where they met and married – Saint Simons Island, GA to Atlanta, GA, where they spent nearly 40 years raising their family. They were members of Alpharetta First United Methodist Church, where Steve served on the Board of Ushers.

In addition to Mr. Sweat’s parents, he is preceded in death by his wife Marilyn Brown Sweat of Jesup,

After the passing of his wife, Mr. Sweat retired back down to the beautiful Golden Isles.

A casual celebration of Mr. Sweat’s life is to be held between 2 and 4 p.m. Saturday, the 24th of April 2021 at Gascoigne Bluff Park near the Pavilion, 1000 Arthur J. Moore Dr. on Saint Simon’s Island, GA. All family and friends are welcome to attend this gathering.

A graveside service will be held 10 a.m. Sunday, the 2nd of May 2021 at Peachtree Memorial Park in Norcross, GA.

Arrangements have been entrusted to Edo Miller and Sons Funeral Home and Oglethorpe Crematorium in Brunswick, Georgia. www.edomillerandsons.cop