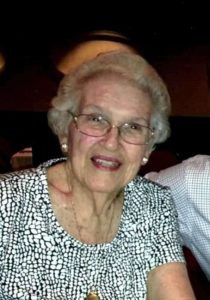 She attended Valdosta State and later received her Master’s degree from Appalachian State University. Merrick was a Hillsborough County School Social Worker for 30 years, retiring as a Coordinator. Members of Merrick’s family were prominent educators in Hillsborough county schools for many years.

She was the third of six generations to attend Hyde Park Methodist Church.  She was a member of Delta Kappa Gamma, Retired Social Workers of Hillsborough County Schools and many other organizations during her long and inspiring life.  She was preceded in death by her parents, Felix Alvin McIntosh and Sallie Matt Dowdell McIntosh.  She was as a descendant of Donald Bain McIntosh, an early Scottish settler of McIntosh County Georgia.  Merrick’s family came to the Tampa area just after 1900 settling in Hillsborough and Manatee counties.  Her great-grandfather built sections of the first railroad into Tampa and beyond to the south.  Family members owned and developed Wimauma, which is named after her grandmothers and her sisters.

The family would like to thank Vicki Ferraro, Mitzi Ridgwell, Kim Hunt and Bayada Home Health Care, especially Madeline, Tammy, Latrisa and Valerie.  With their loving care, Merrick was able to remain in her home.