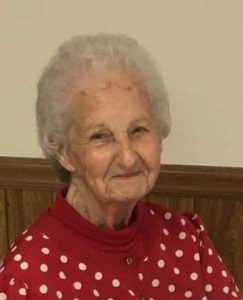 Born in Ludowici, she lived in McIntosh County most of her life and was a graduate of Ludowici High School class of 1949.  She had worked for Altama Delta, Butler’s IGA, and was a homemaker who enjoyed cooking and time spent with family.  She was a member of Darien Church of God, where she served as church clerk for many years.

She was preceded in death by her parents, John and Elizabeth Ryals; sisters, Sulla Kuntz, Lucy Black, and Minnie Stapleton; and brothers, Grady Ryals and Harry Ryals.

Survivors are her husband of fifty-two years, Bill Rozier of Darien; daughters and sons-in-law, Brenda and Danny Mobbs of Townsend and Ila and Robbie King of Brunswick; son and daughter-in-law, John and Angie Ryals of Townsend; sister, Stella Kelly of Ludowici; seven grandchildren, twelve great-grandchildren, and several nieces and nephews.

Funeral services will be Friday, May 28, at 11 a.m. at Darien Church of God, with Rev. Tommy Whaley and Rev. Danny Stilwell officiating.

Visitation will be at the church Thursday, May 27, beginning at 6 p.m.