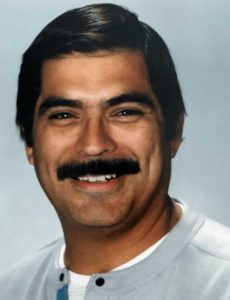 Dimas Diaz, 77, of Brunswick, GA, peacefully passed away on August 26, 2021 at the Fernandina Beach Rehab and Nursing Facility in Florida.

Dimas was born on August 21, 1944 to David Cordero Diaz and Felicitas Salazar Diaz in Los Angeles, CA. The Diaz family moved from L.A. to Los Cruces, NM, where Dimas started grade school. The family later moved to San Antonio, TX, where Dimas and his brothers attended Horace Mann Junior High and Thomas Jefferson High School. After graduating high school, Dimas went to Memphis State University to study history then he attended Southwestern Baptist Theological Seminary in Ft. Worth, Texas, where he received his doctorate in theology.

Upon graduating from Seminary, he became the pastor at First Baptist Church in Darien, GA. After leaving the ministry, he remarried on May 22, 1982 to his second wife Martha Dennis Hawthorne, and gained three sons, William Edward, Michael Dennis and Joseph Jackson Hawthorne.

Dimas is predeceased by his parents and his eldest brother, David Jr. He is survived by his wife, Martha Dennis Diaz; his brother, Hector Diaz; his four sons, William, Michael, and Joseph Hawthorne, and Cillian Diaz Greene, from a previous marriage; as well as his seven grandchildren, six great-grandchildren and one great-great-grandchild.

Private services will be held at Brunswick Memorial Park.

In lieu of flowers, please donate to ALZ.org for Alzheimer’s research.

Dimas had a deep love for his family, friends, community and the Dallas Cowboys. He will be greatly missed by all who were fortunate to have known him.