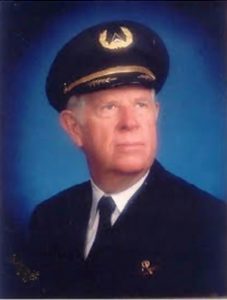 Samuel Winn Baker, III, of Darien, took his final flight on Sept. 18, 2021, in Brunswick, Georgia. Winn was a native of Brunswick having been born there on Aug. 10, 1936 to Sam and Fenton Baker. He was also a descendant of the McIntosh family of Darien.

Winn’s love of flying began at an early age as his father was a flight instructor, member of the Civil air Patrol and eventually became manager of the Malcom McKinnon Airport. He soloed several airplanes on his 16th birthday enabling him to become a licensed pilot at that time. He still owned one of those planes, a Piper Vagabond, which he continued to fly until his sudden passing. Winn spent many afternoons enjoying the beauty of this area on his flights up and down the coast of Georgia.

He graduated from Glynn Academy in 1954 and was a lifelong dedicated alumnus. He attended Georgia Military Academy and the University of Miami. He returned to Brunswick to pursue his love of flying and help his father run Baker Flying Service which later became Golden Isles Aviation. This led to his position as corporate pilot for RJ Reynolds and Dixie Paint.

In addition, he loved flying aerobatics and went on to win many first place awards in the 1970’s. Winn’s other passions included flying antique aircraft and experimental aircraft. From his retirement with Delta until the time of his passing he was first an instructor and demonstration pilot for the Pilatus and went on to fly charters for Gruber Aviation and Lance Toland Association until his passing. On April 27th, 2013 he was inducted into the Georgia Aviation Hall of Fame in Warner Robbins as his father had been in 2007.

He was very active in the QB’s, the local EAA chapter, and the Southeastern Bonanza Group. He was passionate about the Young Eagles, an organization which encouraged and helped young fliers develop their interest in aviation.

Winn was preceded in death by his parents, Sam and Fenton; his first wife, Dolores; his son, Chip; and Carolyn, his second wife of 42 years who was a retired Delta Flight Attendant. He is survived by his daughter, Lois (Candy) Baker and son-in-law David Sapp; cousins, Joe Taylor of St. Simons, and Lila Stevens of Canton, Georgia, along with many other first cousins from the Burroughs family on his mother’s side and his close friend, Jill McGahan.

Vitiation will be held at Edo Miller this Thursday, Sept. 23, from 12:30 to 2 p.m., followed by a graveside service at Palmetto Cemetery.

In lieu of flowers please send any memorial contributions to the Young Eagles Program sponsored by the EAA Chapter 905 at 1797 Demere Rd., St. Simons, Island, GA 31522.

Edo Miller and Sons is in charge of the arrangements. You may sign the register book and leave condolences for the family at www.edomillerandsons.com