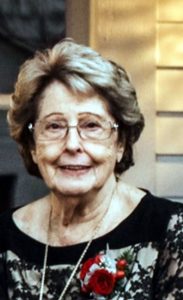 Patricia Fulton Skipper, 87, of Darien departed this life April 26, 2022, at her residence. Patricia was born March 2, 1935, in Savannah, Georgia to the late James W. and Susie Fulton.

Patty, as she was fondly known, met Henry A. Skipper, Jr. while taking business classes. They married, and moved to Darien, Georgia, where they raised three sons. Patty managed the well-known family business “Skipper Seafood,” where the entire family worked together for the majority of her life. She opened and ran a local gift shop for several years and was a member of the Rotary Club of Darien. Patty was a talented artist, whose paintings won many awards and were even showcased at the office of Governor Sonny Purdue. She was a founding member of the McIntosh Art Association and played a vital part of the jail renovation for the McIntosh Art Center. She was a proud member of the First Baptist Church of Darien, GA, where she was baptized at the age of 80. She was also an avid animal lover, and always treated her fur baby Dixie, like a member of the family.

Patty was always known for her contagious smile and laugh. She would always greet you with big hug, and no matter whom you were, she would treat you like family. Patty was always working on a crossword puzzle, dot to dot book, Sudoku, or a coloring book. She enjoyed gardening, watching the birds, and spending time with her family.

The family will receive friends between 10 and 11 a.m. on Saturday, April 30, 2022, at the First Baptist Church in Darien, Georgia. The funeral service to celebrate Patricia’s life will begin at 11 a.m., following the visitation, with Rev. Jack Peller officiating. The burial will follow the service in Saint Andrew’s Cemetery.

In lieu of flowers, the family requests contributions be made to the First Baptist Church of Darien or H.A.R.T of McIntosh County.