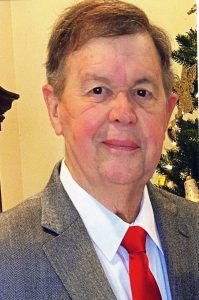 Bruce Carl Williams, age 72, went to his eternal home in heaven on April 28, 2022. He was a beloved husband, father, Papa, son, brother, uncle and friend. Bruce was born in Atlanta, GA, while his father was a student at Georgia Tech. He was raised by his parents, Carl and Mavis Williams, in Dublin and Milledgeville, GA. He was active in the Boy Scouts and attained the rank of Eagle Scout. He was a graduate of Baldwin County High School and Georgia State College and University in Milledgeville.

Upon completion of his BS degree in Biology in 1971, he joined the US Navy as a submariner. He was a leader and chosen as a Prototype Instructor after basic training. He served as a Machinist Mate on both the USS Vallejo and USS Batfish submarines.  After 6 years in the US Navy, he married the love of his life, Cathy (Bevil), and they moved to Columbia/Irmo, SC, where he was employed at the VC Summer Nuclear Plant. He held various positions of leadership in the 23 years he worked at SCANA Corp., formerly SCE&G. They raised their son, Patrick, in Columbia until Bruce was hired by Exelon Corp. of Chicago, IL in 2001. Over the next 4 years, he moved to Lititz, PA where he was the VP of Three Mile Island Nuclear Plant in Harrisburg, PA. In 2005, Bruce accepted a corporate position with Entergy Corp and worked at plants in Arkansas, Louisiana and in the corporate office in Madison, MS. His last position was with CBI in Charlotte, NC, where they made their home in Fort Mill, SC from 2009 – 2014.

He and Cathy retired to their coastal home in Shellman Bluff, GA. Bruce was active in his church, Shellman Bluff Baptist Church, as a deacon, Adult Sunday School Coordinator and VBS volunteer. Their pride and joy were their 3 grandchildren and son who live in Manheim, PA.  Many trips were made to visit them and precious memories were made during their time together.  Bruce loved the Lord and always wanted people to see this was his reason for joy even as he battled prostate cancer for almost 4 years.

He was preceded in death by his parents, brother John Williams, brother-in-law Burton Jones and nephew Trey Jones.

The family extends their heartfelt gratitude to the dedicated and caring nurses and staff of Hospice of South Georgia.

In lieu of flowers, the family asks for donations to Shellman Bluff Baptist Church, 1282 Sutherland Rd., Townsend, GA 31331 or to Prostate Cancer Research at Mayo Clinic in Florida. Donations may be made by phone 1-855-852-8129 or online https://philanthropy.mayoclinic.org/donatemc.

The family will receive friends from 1:00-2:00 p.m. prior to the services at the church.

Rinehart and Sons Funeral Home will of Jesup, Ga. is in charge of arrangements.