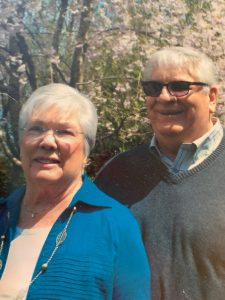 Ray and Lorraine both died within a few hours of each other, Lorraine on May 7, 2022 and Ray on May 8, 2022 in Southeast Georgia Hospital in Brunswick, GA.  They both passed peacefully with their daughter in attendance.   Neither of them wanted to be without the other.  It was a storybook ending for their lives.

Both were born in Bethlehem, PA. : Lorraine on 3/9/42 and Ray on 7/21/41. They recently celebrated 59 years of marriage on April 21.  Lorraine was predeceased by her mother Helen Willey, her father Herbert Willey and her brother Herbert Willey Jr. of Bethlehem, PA.  Ray was predeceased by his mother Helen Snyder and father John Snyder of Bethlehem, PA and his sister Charlotte.  Surviving Ray and Lorraine is their only child, Dr. Kathleen (Snyder) Adolt-Silva, formerly of Bethlehem, PA,  and now living in the Outer Banks of North Carolina with her husband John Silva, and their three grandchildren Shannon Adolt of Portsmouth, NH, Ryan Adolt, of Philadelphia, PA, and Erin Adolt, of Bethlehem, PA. Both Lorraine and Ray are survived by numerous cousin, aunts, and uncles  of the Willey, Straka, Zaleski, and Snyder extended families.

Lorraine was a Becahi graduate, a graduate of the Allentown Business School, and later in life a graduate of Moravian College ’91.  Lorraine worked as a “Kelly Girl”, at Bell Labs, and as a secretary at Bethlehem Iron Works inc. for many years until the couple moved to coastal Georgia where she took up her second career as a 4th grade teacher at Lyman Hall Elementary School in Hinesville, GA. She was proud to have been named “Teacher of the Year” and loved to teach.   After retiring from teaching, Lorraine enjoyed taking adult learning courses in Savannah as well as volunteering as a docent at Sapelo Island.  She was a daily walker and a prolific reader and puzzle-doer who prided herself on her perfect spelling and grammar!  She loved animals and especially watching her birds outside the patio windows. Lorraine enjoyed knitting, crochet, needlepoint, cross-stitch, and quilting.   She was devoted to her husband, Ray, and was his sole caregiver up until her sudden illness in May of 2021. She was unbelievably proud of her daughter and her family and all that they have accomplished, and modest about her own accomplishments. She loved traveling, singing, and musicals and routinely took her family to NYC to see Broadway shows, but really loved seeing her grandchildren perform the most. She was a huge fan of the Philadelphia Eagles, The Pennsylvania Polka, and the Mummer’s parade.

Ray was a Central Catholic HS grad, served in the US Navy, and was a graduate of the Bethlehem Police Academy. He worked at Western Electric and then joined the Bethlehem Police Department as badge #103.  He was a highly decorated officer with the BASD until his retirement, making his way to Lieutenant while earning several Ambassador in Blue Awards and heroically saving many citizens while putting his own well-being second. Ray was one of the first motorcycle officers in the department and was an arms instructor for many years at the BPD as well as a mentor to many officers during his time there.  As a teen he participated in drag racing in Allentown and continued his love of engines by working on car after car.  His stint in the Navy sparked his interest in airplanes which lead to him to famously rebuild a Stearman Biplane in his garage behind the house on Main St.  After his retirement from the BPD, Ray and Lorraine moved to Eagle Neck airplane community in Townsend GA where he build his own RV8 kit aircraft, naming it the “Sweet Lorraine” after the love of his life, and flying recreationally for many years.  Ray became a driving instructor and arms instructor at the Federal Law Enforcement Training Center (FLETC) as a second career and taught numerous secret service and law enforcement personnel as a lauded instructor, receiving numerous awards for his dedication and teaching ability. After retiring from FLETC, he spent pleasurable days in his hangar and hanging out with the other pilots in Eagle Neck.  Ray was always immensely proud of his daughter and his family and their accomplishments. He was gradually physically weakened by a long illness, but continued to have a wicked sense of humor and to watch old movies on TNT.  His idol was John Wayne and he enjoyed watching Nascar and the Philadelphia Eagles.

Private services and internment will be held at the family’s convenience  in Bethlehem, PA.