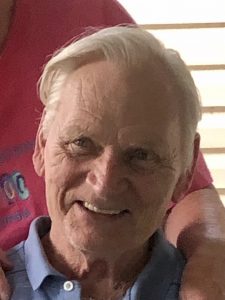 George Wallace Parkinson, 78, died at home in Meridian under the care of Coastal Hospice. Mr. Parkinson was the son of Alvah and Mary Belle Parkinson.

He is survived by his wife, Patty Parkinson; two sons, Allen Parkinson and Tracy (Heather) Parkinson; and two step-sons, Sean Bennett and Kevin Bennett, both of Atlanta.

There are numerous nieces, nephews, grandchildren and great-grandchildren who also survive.
Mr. Parkinson was employed as the lead carpenter by the Glynn County School System before being the original owner of Auto Wagon Towing. Mr. Parkinson was a member of First Presbyterian Church of Darien, where he served on the grounds committee.
The family will be holding a drop-in Celebration of Life on Sunday, May 22, 2022, from 2 to 5 p.m. at the family home in Meridian. All are welcome.

In lieu of flowers, donations may be made to the Memorial Garden Fund at First Presbyterian Church of Darien.
The family wishes to thank their many friends and relatives for their support during this difficult time and the caring staff of Coastal Hospice.