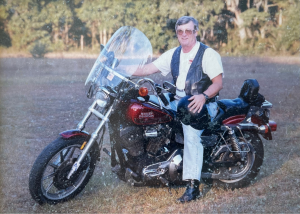 Donald Ray Parkhurst, 76, was born in Pasadena, Texas, to the proud parents of Edith M. (nee Delaney) and Edgar G. Parkhurst. Don’s early/elementary school years were spent in Danciger/West Columbia, Texas, where he established himself as an excellent student with outstanding athletic skills. In 1958, Don’s parents relocated to South Houston, where Don excelled at South Houston Jr. High School (grades 7 & 8). He consistently made the honor roll and set new records for points scored and yards gained as a running back in football. In addition, Don established himself in track as the fastest sprinter in the Greater Houston area in his age group.

In 1960, his family relocated to Baytown, Texas, where Don continued to excel as a student and track athlete. In his junior year at Robert E. Lee High School, Don set a new high school national/international record for the hundred-yard dash at the Texas State Meet at 9.4 seconds. In addition, his high school team won the State Meet, and Don received All American High School Honors.

A five-years Grant-Aid Scholarship was awarded to Don to attend the University of Texas in Austin. His four letters in track were succeeded by receiving his undergraduate degree in Radio, Television and Movies. To complete his Master’s Degree in Mass Communications, his fifth year was spent as a Student Teacher and consulting with his Faculty Advisor, Rodney Whitaker. Rod wrote no less than five best-selling novels with at least one, “The Eiger Sanction,” made into a movie with Clint Eastwood as the lead actor. Don spent an entire summer in the production of summer stock theater with Rod and his team on the U.S. east coast. Several of the scenarios in the book/movie were provided to Rod by Don from his teaching/life experiences.

In the summer of 1968, Don was recruited to join the newly formed U.S. Government Organization, The Bureau of Narcotics and Dangerous Drugs (BNDD), which later transitioned to the Drug Enforcement Administration (DEA) in 1973. Don’s first assignment was as a Special Agent assigned to the Dallas office for the Southwestern U.S. region. As a new agent, Don was required to attend training at BNDD Headquarters in Washington, D.C., wherein he immediately challenged the new leadership that drug capsules came in colors and not just black and white. He positioned himself to return to headquarters to order the appropriate video equipment and to get reassigned to Washington, D.C. to operate that department.

During his eight years in Washington, D.C., he grounded himself in the various law enforcement skills required to provide leadership to successfully coach and mentor trainees and newly selected department directors. Concurrently, Don took a keen interest in Chevy Convertibles and boating, and he gradually transitioned to a 38-foot Cabin Cruiser called “The Midnight Cowboy”. The “Midnight Cowboy” was docked alongside four fellow DEA Agents’ cruisers in Virginia – Party Times! It was during this time that Don also became a member of the United States Coast Guard Auxiliary.

Don met Deborah Strong in 1976, wherein they became engaged in 1977, and they got married and relocated to Brunswick, Georgia, in the summer of 1978. Don transferred to the Federal Law Enforcement Training Center (FLETC) as a Senior Instructor in the Criminal Investigation Training Division. Don’s intellect and leadership were quickly recognized, and he was an immense contributor during the critical period of FLETC’s growth from 1978 to 1997. Don was known as the “Go To Guy” on new initiatives because of his field experience and insightfulness as a respected leader. Don’s ability to work vertically and horizontally within the organization helped assure that the students’ critical training needs were identified, and the appropriate courses were implemented on a timely basis. As a result, the programs and training divisions he helped to organize and lead continued to help thousands of students develop critical law enforcement skills in such areas as Counterterrorism, Financial Fraud, Security Specialties, Marine Law Enforcement, etc. Don served as Division Chief on several training divisions and eventually served as the de facto Deputy Assistant Director for the Office of Training for FLETC.

In addition to his busy daily work life teaching, mentoring, supervising and management activities, Don made time to engage in other FLETC related activities, virtually always in a leadership position. He served in various positions in the local American Federation of Government Employees 2002, including as president. He also was dedicated to the “non-training” side of FLETC life in the form of the FLETC Recreation Association for which he was president for many years, including the several years after his 1997 retirement.

After establishing residency in Brunswick, Deborah and Don had four daughters, Jody (deceased); Yvonne Steinberg; Natalie Parkhurst (deceased) and Michelle (Mia) Jeckel. After relocating to Brunswick, Don’s avocation transitioned from a passion for boating to one for motorcycles and golf. It was in golf that he got the nickname “Dimey”. One of Don’s great joys in life came from traveling the country to support his daughters in their many athletic and academic quests.

Both prior to and after retirement from FLETC in 1997, Donald was very active in a number of altruistic, not-for-profit organizations to benefit the citizens of Southeast Georgia. He was currently serving as the Vice President of the Ed Dixon Memorial Glynn County Lodge 37 Fraternal Order of Police (FOP); friend and supporter of the Veterans of Foreign Wars Post 2588; Member of the River Rats, a non-profit which holds fundraisers to sponsor scholarships for local students; and the Benevolent Protective Order of Elks Lodge 691. Don often served as the Road Captain for many of the FOP Motorcycle fundraisers for Cops and Kids; and he helped establish the Shamrocks, which was a law enforcement organization of motorcyclists who established new chapters throughout the Southwest, Southeast and East Coast.

On May 3, 2022, Don was doing what he loved: riding his brand new motorcycle on a sunny afternoon when he was stuck by an SUV and thrown from his Harley. Quick action from medical professionals who were present at the time of the crash gave Don a fighting chance. He was subsequently airlifted to UF Health Shands where, on May 22, 2022, he ultimately succumbed to the injuries he sustained from the crash. The family would like to express their sincere gratitude to those who provided immediate medical attention to Don on May 3rd.

Donald leaves behind his two daughters, Yvonne (Peter) and Mia (Craig); two grandchildren, Penelope and Elliot; his Significant Other, Peggy Dixon; brother James (Phyllis); Natalie’s significant other, Steven Roddenberry; and a number of first cousins who reside in the Orange, Texas, and Lake Charles, Louisiana areas, along with a number of nieces and nephews that cherished him.

Don will be cherished forever and sorely missed by his many friends throughout the country and in the local area. If Don Parkhurst was your friend, you were very lucky indeed; he was most generous with his time and many talents. Don’s energy and desire to be value added to his family, community and anyone in his sphere will be irreplaceable. Don life’s was cut short, and he left a lot of unfinished business.