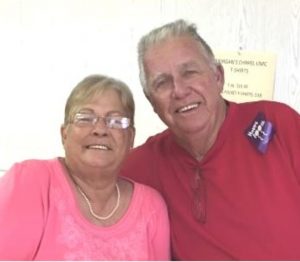 Sandra was born in Southington, CT, June 5, 1949, and was reared in McIntosh County.  She graduated with honors from Darien High School in 1967.  Sandra was a pediatric nurse and was employed at Southeast Georgia Health System for 25 years.  She was very active in Morgan’s Chapel UMC as a Sunday school teacher and sang in the choir.

She was preceded in death by her parents Fernly and Janet Goodrich;  and her husband of 50 years Charles (Shorty) Wallace.  She is survived by her two daughters, Sonya Wallace Lumley and Georgia Wallace Nessmith, both of Cannon Bluff;  three grandchildren, Kayla Lumley of Jesup, Shelby (Rob) Rempel, and Andrew (Ashley) Nessmith, both of Statesboro.  four great-grandchildren Paisleigh and Connor Reed, Kylie Rempel and Addie Edwards; five siblings, Sybil Wooten of Savannah, Dennis (Bootie) Goodrich of Eulonia, Shelley (Johnny) Skipper of Kingsland, Thomas (Vicki) Goodrich of Brunswick, Mark (Annette) Goodrich of Richmond Hill; and many nieces and nephews.

Arrangements were under the direction of Howard Funeral Home of Ludowici.