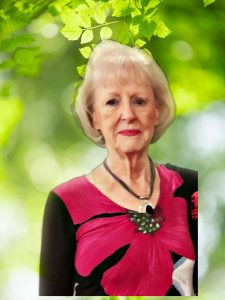 Priscilla Ann Lane Bethune (Patti), 80, of Darien, GA, passed peacefully to her heavenly home on Thursday, January 5, 2023, at Hospice of the Golden Isles.

Born on May 20, 1942, to the late Wallace Lane and Nancy Savard in Jesup, Georgia, Patti married Jack A. Bethune on June 8, 1963, at Glyndale Baptist Church in Brunswick. She was a WMU Ministry Member, a member of Auxiliary of the Gideons since 1980, and a member of The First Baptist Church of Darien. where she served as Sunday School Teacher and secretary/bookkeeper of the church since 1994.

She is preceded in death by a sister, Phyllis Watson; and grandparents, Frank and Lois Roberson and Mr. and Mrs. Lane.

If monetary remembrances are desired, they can be made to Hospice of the Golden Isles.

Visitation will be on Saturday, January 7th, 2023, from 9:30 a.m. to 11 a.m., with funeral services to begin at 11 a.m. at First Baptist Church of Darien, with Reverend Jack Peeler officiating. Private interment will be at Brunswick Memorial Park.